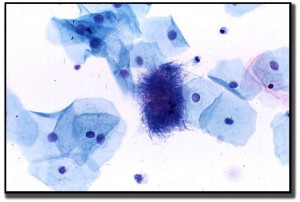 Actinomyces is a gram-positive, anaerobic, rod bacteria. The most common predisposing factor is the duration of IUD use. The type of IUD does not influence the presence of this bacteria.

Most women who are positive for actinomyces infection are asymptomatic. Although this bacteria is generally commensal, there are reported cases of actinomyces causing pelvic inflammatory disease (PID) in women who have IUDs. 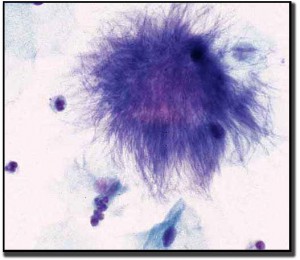 Actinomyces look like a cotton ball, or a woolly, fuzzy mass. The organisms are tangled clumps of rods of varying lengths and exhibit acute angle branching, non-spore-forming bacilli. 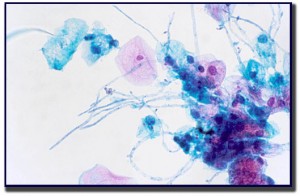 Candida albicans is responsible for 80-92% of the candida infections. Candida, or fungus, is present as part of the normal vaginal flora in 15-20% of healthy women and in up to 30-40% of pregnant women. Factors that predispose women to candida are: pregnancy, diabetes, HIV infection, oral contraceptives, antibiotic or corticosteroid use, immunosuppression, and history of recurrent candida. 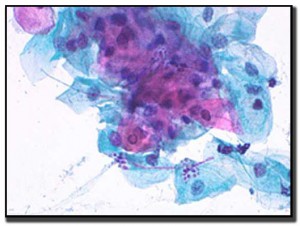 Other factors that may increase the incidence of candida include the use of douches, perfumed feminine hygiene sprays, topical antimicrobial agents, and tight, poorly ventilated clothing and underwear. 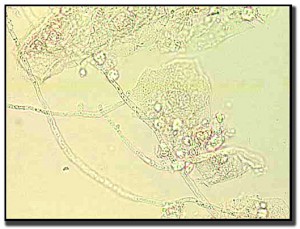 A wet smear is made from the exudate, and 10-20% KOH is added to the preparation. The fungi will appear in the form of long, thread-like fibers and may have attached tiny buds. Lactobacillus is almost always absent in a smear with candida present. 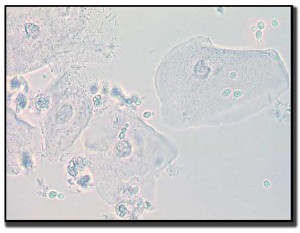 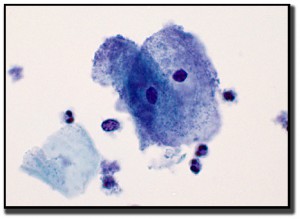 Bacterial vaginosis is a sexually transmitted condition. It is important that both partners be treated. “Carriers” are common. On cytology reports, this finding is stated as “a shift in vaginal flora consistent with coccobaccilli spp.”

There is an absence of lactobacilli; however, small coccobacilli are evident. Squamous cells that are covered by a layer of coccobacilli—especially along the margin of the cell membrane, uniformly spaced, and grainy-appearing—are referred to as “clue cells.” There are also clumps of small rods seen in the background. 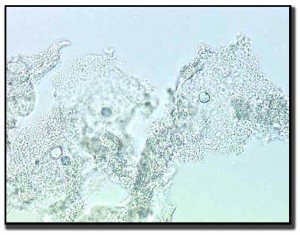 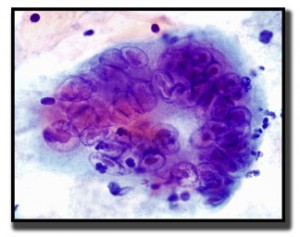 Herpes simplex virus (HSV) can maintain a latent state for the lifetime of the host.

Virus-infected cells are usually found at the edge of and in the base of lesions. When herpes manifests on the mucosa of the labia, vagina, or both, the infection presents as vesicles. Cervical and vulva involvement is not uncommon.

Both HSV1 and HSV2 have the same cytologic impression.

The virus causes problems with mitosis in that the nucleus replicates, but the cell doesn’t divide properly. This leads to multinucleated cells. The chromatin of the nucleus marginates to the nuclear membrane. The nuclei also tend to mold around each other in order to fit within the cell membrane. 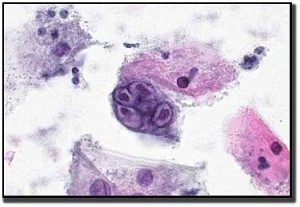 Most infections with herpes simplex are asymptomatic. The host immune response appears to play a major role. The incubation period is 2-11 days (usually 6-7 days). Infected individuals are most infectious during the early days of a primary infection, although the virus may still be transmitted late in the infection, or from an asymptomatic person. 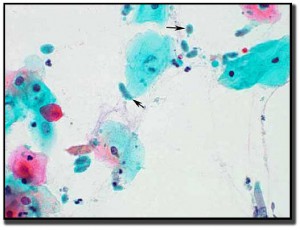 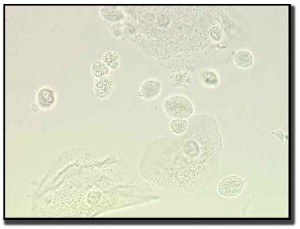 Like candida and coccobaccillus infections, trichamonas can also be seen using a wet prep. The cells are oval to round with a pear-shaped nucleus. On wet preps, the protozoan movement by the flagella is easily identified.