Thankful for the Blessings of Newborn Screening

Like all first-time parents Kristi and David were excited and a little nervous about the birth of their baby – a boy they named Logan.

Both Kristi and David work in healthcare-related fields. She’s an obstetrics nurse at a Wisconsin hospital and he’s a paramedic and firefighter.

Their shared healthcare background not only prepared them for the usual concerns of first-time parents, it also has helped them navigate a world they never expected to live in – that of parents of a child with PKU.

PKU (phenylketonuria) is a metabolic disorder that requires a lifelong, low-protein, low-phenylalanine diet to avert irreversible brain damage from the accumulation of the amino acid phenylalanine in the body. People living with PKU drink liquid supplements and/or take pills to obtain needed nutrients for proper growth and development. 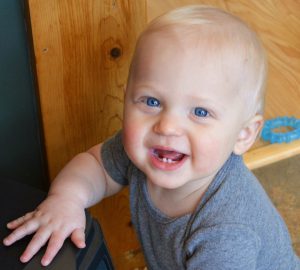 Logan’s PKU was found through his routine newborn screening test. Before Logan was 48 hours old, his heel was pricked and a few drops of his blood were put on a special filter paper card.

After the blood dried, the card was sent to the Wisconsin State Laboratory of Hygiene (WSLH) Newborn Screening Laboratory on the campus of the University of Wisconsin-Madison. There Logan’s dried blood specimen was tested for 44 rare, serious, hidden disorders – including PKU – that, if not treated quickly, can lead to severe health problems and sometimes even death.

Out of the 65,000 or so babies born in Wisconsin annually, about 135 will have one of the disorders. So Logan is in some pretty exclusive company.

Logan’s initial newborn screening test results showed his phenylalanine levels were very high – much higher than the normal range. When the physician specialist contacted Kristi and David with the results, they were shocked.

“As an OB nurse, I would give new moms education information about newborn screening,” Kristi said. “I had heard about PKU and knew the basics, but I’ve gotten very educated in the last several months since Logan was born.”

Kristi had been breastfeeding Logan. But because breast milk contains phenylalanine, Logan also started on a PKU formula supplement as his parents, doctors and now dietitians worked to lower his phenylalanine levels.

During the first few weeks of Logan’s life, he had heel prick dried blood specimens sent to the WSLH Newborn Screening  Laboratory twice a week to monitor whether the dietary changes were making a difference.

“Those first few weeks were a roller coaster,” said David. “We would have his blood specimens sent overnight to the lab and then wait to hear the results the next day.”

Both Kristi and David said Logan has been a champ through everything. His levels have stabilized and he’s doing great.

The family is also adjusting to Logan’s diet.

Over these first several months of Logan’s life, Kristi and David are learning what they need to know by working with Logan’s physicians, dietitians and others at the Waisman Center at UW-Madison. They also are meeting other kids with PKU.

“We went to a wedding a couple of months after Logan was born and met a family whose child has PKU,” said David. “We now know five or six people with PKU and are seeing there are areas of support out there for families like ours. It’s been an adjustment for us, but it’s manageable.”

Kristi and David credit the staff at the WSLH Newborn Screening Laboratory for saving Logan’s life.

“We are so blessed being in Wisconsin,” said Kristi. “Thank you for everything you do.”

Newborn screening is a special blood test for newborns. Babies born in Wisconsin are screened for rare, serious, hidden disorders that, if not treated quickly, can lead to severe health problems and sometimes even death.  Just a few drops of blood from a newborn baby’s heel are put onto a special test paper and sent to the Wisconsin State Laboratory of Hygiene to be tested. Babies also have their hearing and hearts screened at the hospital before going home, or by a midwife if born at home. The program is administered by the Wisconsin State Laboratory of Hygiene at the University of Wisconsin-Madison and the Wisconsin Department of Health Services.