Joelle Odor holds a special place in the history of newborn screening in Wisconsin.

Joelle was the first baby to test positive for phenylketonuria (PKU) after newborn screening was consolidated at the Wisconsin State Laboratory of Hygiene (WSLH) in 1978. At the WSLH newborn screening laboratory, dried blood spot specimens from babies born just days earlier are tested for rare, serious disorders that left untreated can lead to severe health problems and sometimes even death. 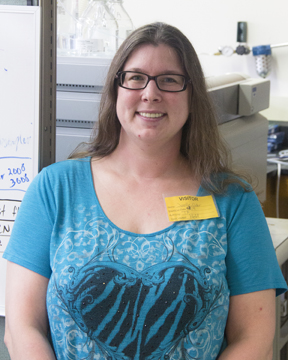 Joelle Odor in the Wisconsin Newborn Screening Laboratory. Joelle was the first baby to test positive for PKU after newborn screening was consolidated at the WSLH in 1978.

Joelle is a pioneer in other ways as well. As part of only the second generation of babies whose PKU was found through newborn screening, Joelle hopes her life story provides lessons about the the ups and downs of living with a complex medical condition that is found at birth.

PKU is a metabolic disorder that requires a lifelong, low-protein and low-phenylalanine diet to avert irreversible brain damage from the accumulation of phenylalanine in the body. People living with PKU take formula supplements to obtain needed nutrients for proper growth and development.

Joelle says that during her early years living with PKU she felt “special and unique”.

“I had special milk and special things for me to eat,” she explained. “My grandma even had a special pan she’d use to make me sautéed mushrooms.”

She was even featured in a local newspaper article when she was 3 years old.

“When I was about 3, I started noticing that I was different,” Joelle said. “In the newspaper article I even said ‘Mommy eats pizza, Daddy eats pizza, and I eat French fries’.”

Joelle says that until the second half of her 2nd grade year, living with her special PKU diet was “no big deal”. Then a boy in her class asked her what would happen if she ate a cheeseburger (a high protein food) and Joelle said she started seeing the diet restrictions and the negative aspects of being on a special diet.

“Even though my parents and the PKU clinic staff focused on what I could and should eat, I started feeling isolated and alone and depressed,” Joelle said. “I started rebelling against my diet and sneaking food I knew I shouldn’t eat.”

It was around this same time that Joelle’s special PKU formula also changed and she didn’t like the taste. People with PKU will change the formula supplements they take as they age and their nutrient needs change.

“Because I was in the 2nd generation of early-treated PKU people, the formula options were pretty limited at the time,” she said. “I started leaving my formula out to spoil or dump it down the sink. My cat actually liked the taste of the formula and he learned to drink it through a straw.”

In 3rd through 5th grades, Joelle’s phenylalanine (Phe) levels started to climb. They were 9 to 10 and it’s now known that Phe levels above 6 can negatively affect the brain.

Then in 6th grade her Mom was diagnosed with cancer while her Grandma was also being treated for cancer. Joelle’s rebellion against her diet intensified and her Phe levels increased to the low teens.

Her grandma died while Joelle was in 7th grade and at the end of her 8th grade year, Joelle’s Mom died.

“While my Mom was dying, I was in denial,” Joelle said. “My high Phe levels were affecting my coping skills and my reasoning abilities. When she died I was completely confused because I had been in denial.”

It wasn’t until 2005 when Joelle went back “on diet”.  More formula supplement options were available and Joelle found one she could tolerate. Her Phe levels began to decrease and she started to process her Mom’s death and come to closure. But the effects of those years “off diet” linger.

“There are parts of time from 6th grade (late 1980s) until 2005 that I don’t remember due to my high Phe levels,” Joelle said. “Even after being back ‘on diet’ for 10 years I still have some slowed processing, memory loss and concentration issues. I have moderate PKU, not classic. With classic PKU, going ‘off diet’ can cause even more severe negative effects.”

Despite the years of being “off diet”, Joelle continued to go to her annual clinic appointments at the Waisman Center.  The support and advice she received from those appointments helped Joelle understand that her PKU diet is just like any other diet – it’s all about portion levels.

As an adult living with PKU, Joelle is now doing informal mentoring with kids who have PKU and their families.

“With social media, it’s so much easier to connect across geographic boundaries,” she explains.

Her hard-earned advice for kids with PKU –  STAY “ON DIET”!

And to their parents she suggests involving the kids in prepping and cooking their food, pre-measuring snacks so they’re “grab and go”, and explaining what can happen if they go “off diet”.

“We now know so much more about the bad effects and what can happen,” Joelle said. “I hope my story can help others with PKU see that their lives have so much potential if they stay ‘on diet’.”

Newborn screening is a special blood test for newborns. Babies born in Wisconsin are currently screened for 44 rare, serious, hidden disorders that, if not treated quickly, can lead to severe health problems and sometimes even death.  Just a few drops of blood from a newborn baby’s heel are put onto a special test paper and sent to the Wisconsin State Laboratory of Hygiene to be tested. Babies also have their hearing and hearts screened at the hospital before going home, or by a midwife if born at home. The program is administered by the Wisconsin State Laboratory of Hygiene at the University of Wisconsin-Madison and the Wisconsin Department of Health Services.